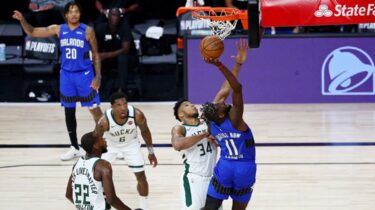 One game down in the Bucks 2020 playoff run and every single fear that Bucks fans had for this team just got magnified after a disheartening 122-110 loss to the Orlando Magic. A Magic team that shouldn’t even that qualified to participate in the postseason. A Magic team that was supposed to be a minor speedbump for the Bucks on their way to an NBA Championship. Or so we thought.

After today’s embarrassing loss, a lot needs to change before we can blow off Orlando like we did before the series started. “Oh its Magic, Bucks in 4.” Not so fast Bucks fans, including myself. Today’s game was an unwanted reminder that there are a lot of things this team needs to fix if we want to label them as the team to beat in the Eastern Conference. Don’t get me wrong, the Bucks are and still best team in the East, even after today’s no-show. The East will go through Milwaukee, but there are still some big things to change, if they want to get back to their pre-bubble self. And it starts with Khris Middleton.

If you’ve paid any attention to Milwaukee Bucks basketball over the past year and a half, you know that the Middleton subject is a touchy one. Some fans love him some fans hate him, but the truth is harsh and the truth is real. As great as reigning MVP Giannis Antetokounmpo is, the Bucks aren’t gonna get to the Finals without a premium number two-punch. The NBA is full of them, Anthony Davis to Lebron, Paul George to Kawhi, even Jayson Tatum to Kemba Walker. If you want to win a title in today’s league you better have a great one-two punch, and if Khris Middleton has shown us anything in last year’s postseason and through the first game of this year’s, its that he’s not ready for that. He should be, the recipient of a five year $178 million deal. But he hasn’t, not even close. He’s proved that when Giannis isn’t at his best, the rest of the team doesn’t pick up any slack. Take last year’s Toronto series as a perfect example. Giannis and his teammates cruised through the first two games of the series, up 2-0 heading up to Canada. Middleton and the rest of the squad were playing great. But as soon as the Raptor defense figured out how to slow down Giannis, Middleton was nowhere to be found. He couldn’t hit a big shot or even a shot, averaging only 13.7 points in the series. A series expected to go to the Bucks instead went to the Raptors, which were a similar team. Both teams had a superhuman star, Kawhi Leonard for the Raps, Giannis for the Bucks. And both had a good enough supporting cast to get their respective teams that far. But besides Kawhi’s insane four game run, the reason Toronto got to and won the Finals was because their second (and third) best player rose to the occasion, something we just haven’t seen out of Middleton and company. And its something we’re going to need to see if we’re gonna watch the Bucks play in the Finals. Having your second-best player just not show up in the most important times is just too big of a weakness to ignore. And we just watched him flop against the Magic. If something doesn’t change what’s gonna happen when we play better teams like Miami, Boston, or Toronto. Let’s just hope we get that far first.

Secondly, we’re gonna half to see some better defense to really be confident in this team moving forward. Especially guarding the three-ball. In an era of the NBA that is so hard-pressed on shooting threes, you have to be able to defend against it. Orlando was 16-41 beyond the arc, 39 percent, and it seemed like a lottery were able to find a wide-open man for three, especially in the final quarter. So maybe the Magic just got lucky and happened to be shooting the lights out, which has happened in a lot of Bucks losses, but still they’ve got to figure out a way to at least limit the number of threes taken. 92 points allowed after three quarters is just not good, especially against a team like Orlando

So hopefully in a couple months, weeks, or days, I’ll be able to look back and laugh at all my concerns, but for now those concerns are real. They are problems that they will have to plow through and defeat if they want to win an NBA Finals. All championship teams have problems, and with these in mind, it sure will be fascinating to see what the Bucks are made of in this odd but exciting playoff run.